(Excerpts from my travel diary) - Week Three
Bay of Islands 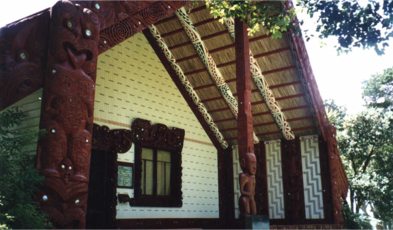 We travelled further north and stopped off at a place called Pahia in the Bay of Islands, where we enjoyed a local favourite lemonade called "Lemon and Paeroa" at the Giggling Marlin cafe.

I think this place is very much the 'Caribbean' of New Zealand; it just has that feel of long summer evenings, warm shallow seas, sunshine and boats and of course Islands.

We watch some rather intrepid people go on a huge power boat called The Excitor which travels around the Bay at break neck speed, but which we didn't have time to try. We check into the Marlin Court Motel a very nice place, but again all the motels here were quite expensive.

We had dinner on board the 'Tui', a huge ship in the harbour near the Waitangi Treaty house. The place was deserted and we wondered about the quality of the food, but took a chance and were delighted we did. The food was fabulous and the service excellent. It was deserted because apparently everyone arrives here on a Saturday and is too tired to go out. 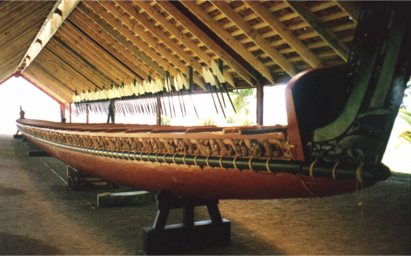 Fact File: The ship is part of the Kelly Tarlton franchise and is a museum dedicated to detailing the history of the famous shipwrecks that have occurred along NZ's sometimes treacherous coastlines.

It contains many of the salvaged items such as ships bells, various nautical interments, passenger items, including a chest full of gold and diamond jewellery, which was being transported to NZ by a man named Rothschild to sell.

We were constantly attacked by small berserk crickets on the ship. They were very annoying.

Back at the motel we discovered we were knee deep in extremely berserk crickets, it wasn't the motel's fault as they were apparently everywhere in the town. Phil murdered them all, thereby building up a huge karma debt ... but he didn't care.

The next day heralded a visit to Hobson's beach which was small and very picturesque.

The treaty house was set in fabulous grounds (the Waitangi National Reserve) with a forest on top of a cliff overlooking the bay.

Also worth a visit is the huge Maori war canoe (made from just one Kauri tree log and has room for 100 warriors) in a shed. The Treaty house and Reserve (part of the Waitangi National Trust) was $NZ14 for two and you could also buy a facsimile of the original Waitangi treaty for $NZ2.50. 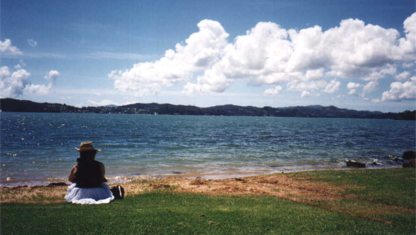 All in all a very, very good holiday. We stayed about 3 weeks and actually saw only a smallish part of the whole country. We squeezed in as much as we could though, missing out Wellington and all of the South Island. We hope to go back sometime soon though.

If you are interested in travelling to New Zealand, or would simply like more information, see the
New Zealand Travel Guide.