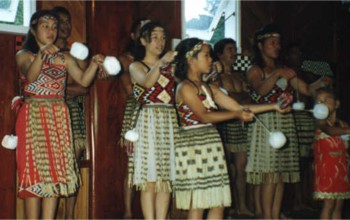 We travelled on to Roturua through some absolutely fabulous scenery, I was getting used to the sight of Australian Blue Gums, and the low population level compared to the UK.

Rotorua is sat right on top of a very volcanic area; you know you are getting near when you start craving egg and cress sandwiches, that's because of the overlying smell of sulphur. But the scent is so mild it is almost pleasant and you soon don't notice it at all.

We stayed at the Tannoch Brae which was a nice motel and splashed out NZ$20 on a discount card which gave us a discounted entrance to several places nearby.

We traipsed off to the government gardens and the Roturua museum which detailed some history of the area and how Victorians used to come here to relax in the hot mineral baths. The water comes out of the ground at around 100 degrees centigrade, so you obviously have to add some cold to it. There was an interesting display about the Mt Tarawerea volcano which erupted with a bang that was felt 200kms away in Auckland on 10th July 1886 at 12.30am in the morning. A Maori village was buried and preserved in the ashfall.

Later that evening we went for a traditional Maori hangi (see hangi page). This took us to Rakeiao Marae (near where the Queen stays when she's in NZ apparently) on the shores of Lake Rotiti. It is well worth going to one of these, this was quite reasonably priced about NZ$45 each (about £18 at the time). For this you get dancing, entertainment and of course food. The only minus was that we had to travel around Rotorua in the coach picking everyone up and then dropping them off afterwards.

The next day we visited the Rainbow Springs Trout farm. Here, you can wander around a tropical forest complete with silver ferns (the NZ national plant).

The farm show at the agriculture centre next-door was good fun and if you are feeling really annoying you can volunteer your friends for things like churning cream (very hard work) or lamb feeding. Hoorah, I finally saw some sheep! Of special note are the souvenir shops here and at the Rainbow springs complex, which offer the widest variety of gifts and merchandise of any place we visited during the entire trip. Here you can buy some beautiful Paui shell (like abalone shell) jewellery and sheep skin rugs, Traditional Maori carvings and a lot of other items. 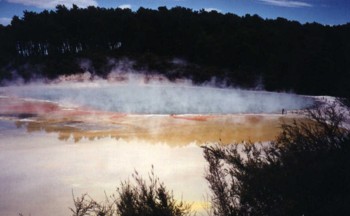 The highlight of the week for me was a visit to Waiotapu (which means 'Place of sacred waters'). This is the most colourful volcanic area in New Zealand. The smell was incredible; an acrid sulphur and brimstone odour that sits in the back of your throat. We visited on a hot sunny day, which in retrospect may have been a bit of an oversight. There were lots of open pits full of bubbling mud, all surrounded by hot streams. The pits and lakes have names such as 'The Devil's Home'

and 'The Artist's Palette'. (The colours are arsenic and other toxic chemicals).

My favourite was the Champagne Pool; a huge crater formed 900 years ago with the water at a scalding 74 degrees centigrade. The way to get there was to walk on a spindly bridge over the hot water; which was a little nerve racking.

This was an absolutely amazing place which words cannot really describe. If you get a chance to visit NZ don't miss this out. Unfortunately we missed the Lady Knox geyser nearby as it only erupts once a day.

We travelled south even further on our way to Lake Taupo. Just outside the town of Taupo is the world famous Huka Falls (Full name is Hukanui, meaning 'great mass of foam'). It's indescribable, the sheer volume and force of water, the colour and the ground vibrating. Fact file: Over 400 rivers flow into Lake Taupo, but only ONE river flows out. At peak times 200 cubic metres of water flow over the Falls every second! These bare facts cannot describe this phenomenon the only way is to visit it.

We arrived in Taupo on a Monday and everything seemed to be shut that evening. But we found a great restaurant/bar called Bogarts. Try the 3 different kinds of chips (potato, pumpkin and kumara - a Kiwi sweet potato). For some reason the Kiwis seem to think Kumara chips are great with a garlic sour cream dip - yep they're right.

Turangi is next further south and we stayed at the Creel Lodge Motel, it's next to the Tongariro River and very reasonably priced. We were in the depths of the Tongariro National Park. The mountains are bleak and majestic including the famous live volcano Mt Ruapehu with steam billowing out of the crater and assorted fumaroles. We headed south 50km and visited the desert, but to me it looked like moorland rather than desert. The army use it as a training ground apparently and people have wandered off, got lost and died up here.

We drove up a mountain which we blithely assumed was Mount Tongariro (which means carried on the South wind). We found out later that it was actually Mount Ruapehu a live volcano which erupted 3 months before and after our holiday. It's aproximately 5,000 feet high and so is quite a bit colder at the top, even in summer.

We hit some bad weather, rain and wind. But determined not to be put off we visited Te Whakarewarewa Thermal Reserve with craft centre. The reserve is a series of pathways between lakes, geysers etc. They are pretty impressive, bubbling, spitting and whooshing. These are more active than Lady Knox and erupt every 20 minutes or so. Although, when we went the geysers were competing with the rain and wind and everything was overly steamy.

In the Maori village we purchased some corn-on-the-cob, cooked in a nearby mineral pool (the water was so hot it only took a minute or two). Those sparrows are here as well and pinch the corn straight out of our hands! (Either it's one very entrepreneurial flock or the sparrows here have an easy time of it).

Also worth a visit is the Jade Centre in Roturoa where you can watch the craftsmen carving pendants and statues.