(Excerpts from my travel diary) - Week One 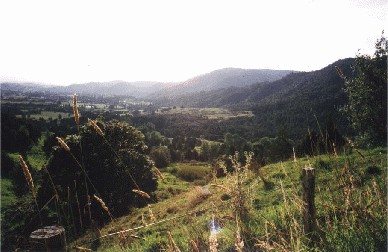 We left a cold English winter in January '96 to arrive in the balmy NZ summer, the sky is blue and the sun is shinning. Once out of Auckland airport, I got my first taste of the Antipodes and was pleasantly surprised.

If I had to sum up New Zealand it would be: a bit like Scotland with palm trees. Most of the buildings I saw seemed to be no more than two or three storeys high. After all when you live in a country that has half the population of London with an area larger than the UK who needs to build up when you can build out?

New Zealand is technically a sub-tropical climate, but without all the inconvenience of the nastier kinds of tropical fauna (i.e. anything large, crawly/slithery, poisonous and unfriendly). Apparently there is a small poisonous spider (called a 'Katapo') deep in the bush somewhere, but it is so rare, anyone that who worries about being bitten by it, really shouldn't have left home in the first place.

I found the people very friendly and open and made the typical English mistake of expecting to see the countryside absolutely bursting with sheep. I was later to find out this isn't so, even though the sheep outnumber the people.

Brown's Bay is a seaside resort (quite an exclusive and expensive one apparently) just north of Auckland. Look out for the resident flock of highly experienced food-pinching sparrows in the main street. The beach sand is a pale brown colour which I presume is what gave the place it's name (although it could quite possibly be someone named Brown). I do so like to find out about places I visit. 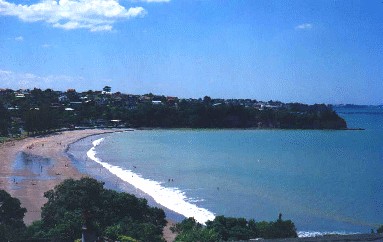 In Auckland we visited Kelly Tarltons Antarctic Encounter and Underwater World; one of the largest aquariums of it's type in the world. There is a huge glass tunnel you can walk through and see fish all around you; an amazing experience (especially if you are like me and are a little nervous of big fish).

You can also visit a copy of Scott's hut in the Antarctic from 1911 and travel on a train around arctic panoramas. There's a cafe opposite where I was introduced to Lion Red beer and a local delicacy: Honey Marshmallow cakes.

While we were in Auckland, we joined a couple of Phil's friends and went to the annual open air concert in Auckland park, the site of an extinct volcano.

We arrived mid-afternoon and spent a couple of hours enjoying the sunshine and drinking tea and cold beer. While we waited for the concert to begin, Phil showed me the nearby Natural History Museum (with the Auckland Provincial War Memorial) at the other end of the park on a small hill.

By the time the concert began (around 7:00pm) over 300,000 people had gathered there (almost a 10th of the total population). The concert was free, but people made voluntary donations to a couple of well known charities. The concert programme varies every year, but the central theme is opera and classical music with local favourites such as Dame Kiri Te Kanawa together with guest performers; supported by the NZ Symphony Orchestra. The year we were there, the concert culminated with Wagner's "The ride of the Valkyries", complete with laser effects, fireworks and the NZ army firing 12 heavy guns at the appropriate moments!

We headed south to Tauranga (aprox 200kms from Auckland) making a quick visit to the Historic Village/Museum complete with steam train and also a Maori village or 'Pa'. There was great little rock and gem shop, where I bought some opal chips and Kauri Gum (like amber but lighter in weight and more brittle). It was a nice place to wander around on a hot summers afternoon. There was a small cafe there where we were entertained again by the sparrows eating crumbs between our feet. Tauranga itself is a medium-sized city on the coast with a nice shopping centre and open air cafes. 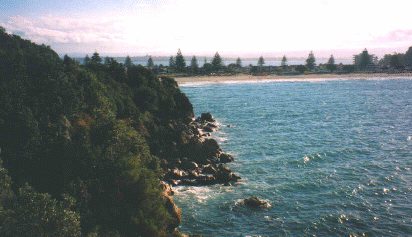 Next was a drive to the Waitomo Glow-worm Caves, with me looking out for the sheep on the way but not finding any. Have they all been eaten or what? We join a tour and enter the bowels of the earth, up and down steps wet with stalactite drops. (It's apparently very lucky if a drop hits you on the head ... not so lucky if it hits you in the eye and you fall down the steps though). We boarded small boats and travelled down the underground river. At this moment, the guides turned off the lights and in the cave roof there were literally thousands of tiny, greenish lights, like stars; these are the glow-worms.

Also worth a visit is the beautiful Kaimai mountains, Mount Maunganui and adjacent beach. I was introduced to the local food stuffs such as Pinky bars, Honey Logs and Burger Rings and of course Rocky Road chocolate bars (yes 'health' food).

Also worth trying out are the Fernland Spa Hot Pools (but not after eating that lot), some of the booths are open air and also open at night, when you can gaze up at the Southern Cross constellation whilst steaming gently away.