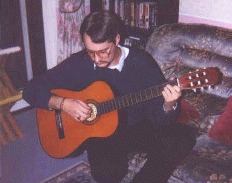 Relaxing with a beer and a little guitar practice
Photo: S.Lawrence

I have always loved music! I think it mostly comes from my father, who is a pretty fair piano and keyboard player and who has a pretty fair singing voice as well (unfortunately, my voice sounds like a cat trying to go to the toilet with it's bum sewn up!)

My brother was a good drummer, but I never learned to play any form of instrument for a long time; partially because I didn't really know what I wanted to learn to play, but mostly because I have a really hard time reading music. Both my father and brother had a much broader musical taste than I, but I'm catching up a little bit.

Then in 1991, I found myself working nights as a computer operator for a large finance company. The work was kind of weird; it was busy for the first couple of hours (doing pre-run backups and such) and for the last couple of hours (printing stuff out etc) ... but there was about an 8-hour period in the middle, where there was mostly nothing to do. You had to be there in case anything crashed, but there was nothing much to do ... BORING!

One of the lads there was a guitar player and he started showing me some basic chords and a few simple songs (which I mostly learned parrot-fashion) on his classical guitar. My interest grew to the point that I purchased my own guitar and started mucking around a little with various pieces of music that took my fancy.

My friend Anthony Bailey is an excellent guitarist. His speciality is Spanish Flamenco but he is also an excellent classical guitar player and was a music teacher for a long time. Periodically, he plays at a local club and I always enjoy popping along for a beer or two and spending a couple of hours listening to a REAL guitarist play.

On a trip back to New Zealand in 2006, my folks took me down to the local branch of the Rock Shop (a chain of music stores in which the son of an old family friend is a fairly senior figure) and bought me a great Taylor Model 1 acoustic guitar, which I've played almost every day since.

I fumbled along on my own for a few years, picking up a steady stream of tunes, but not really progressing very much. Then in 2002, I met Kevin O'Kelly, who was to play a significant part in my musical education and who also became one of my closest friends. Kev is a very accomplished musician, an excellent drummer and bassist, as well as a pretty accomplished guitarist. He plays in a local rock covers band called: FuZeD and in the years that followed, I accompanied him to a large number of gigs, helping out as unofficial roadie and monitoring the PA levels during the gigs.

A few years back, Kev held a brilliant BBQ at his place in Basingstoke, which was so popular it became an annual event. He encouraged me to play a short evening set or two and my confidence started to grow. In subsequent years we also attended a regular monthly blues jam and I even managed to pluck up the courage to do a couple of short sets of humourous songs during the intermission, which seemed to go down OK.

I still don't play very well; I don't practice often enough and I still can't read music (although I can almost cope with guitar tab) so there's no chance of ever being the next Eric Clapton, Steve Vai or Dave Gilmour, but I do enjoy playing. I find it very relaxing and there's a nice feeling of accomplishment, to pick a piece of music and practice until you get it down-pat, note for note.

In December 2008, I spashed out on a new "collapsible" guitar; a Yamaha SLG10 - see the Blog article for a write up and a YouTube Video.

My musical taste has been influenced by my guitar studies and my favourite musicians include:-

Also check out these sites ...

...among many others. The only thing that links most of these together is they all have quite distinctive guitar styles and some interesting licks and riffs.

Like most folks, my tastes have changed over the years; Su got me interested in music with a Celtic flavour and I quite like some of Clannad's stuff when I'm in the mood. But my heart still belongs to the rockers!

Sadly, I heard little mainstream popular music from the 90's that interested me much. Most of it is hip-hop and rave, neither of which has any heart or soul (I must be getting old, because for music to be interesting to me now, it must be more than something to dance to!) - the odd Oasis track comes close, but doesn't really cut the mustard. But in the new Millenium, things seem to be changing for the better; bands like ColdPlay, Foo Fighters, NickleBack and Primal Scream have all produced excellent tracks and are all helping to herald a new generation of musical expression.

If I had to pick one band as my favourite it would definitely be Pink Floyd. "Shine on you crazy diamond" (from the "Wish you were here" album) has got to be one of the greatest cuts of all time! That said, I do think that by the time they released "The Wall" and "The Final Cut" it was getting pretty cynical. To paraphrase Dave Gilmour:-

"At the time I bought into the whole idea, but I have to say that in hindsight, it does seem to be a bit of a whinge"

I'm sure a lot of Floyd fans will disagree with me, but I think their album "The Division Bell" was their definitive work. "Cluster One", "Marooned" and "High Hopes" are fantastic tracks and I keep hoping they will do another European Tour soon (If you haven't been see Pink Floyd perform live then you haven't lived!)