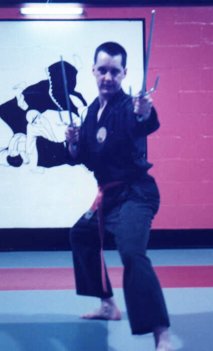 I first became interested in the Martial Arts when I was 14 years old. As a lanky, skinny and rather uncoordinated kid, I was pretty useless at organised sports and because my folks lived 10 miles from the nearest city, it was pretty difficult to commit to any form of sports team for practices etc.

I started with Taekwondo, but in the years that came after my departure from high school, I moved around a lot, going where the work was and often worked shifts with weird hours. This made it difficult to continue my studies with one particular style or school.

I have studied other well-known styles including Shotokan Karate, Okinawa Goju-Ryu, Five-animals Kung Fu and a little Judo and Aikido.

I became interested in Eastern Martial History and Philosophy and delved into the most well-known works of Sun Tzu (The Art of War) and Miyamoto Musashi (The Book of Five Rings).

Many aspects of the philosophy of Bushido interested me...but not all. The concept of devoting yourself to something greater than yourself (and through a process of physical exercise, mental focus and self-discipline, to make yourself a better person) was an appealing idea. Less appealing (especially as I have grown older) is the idea of blind and unquestioning devotion to the power served.

In 1994 I began to study Ju-Jitsu under the tutelage of Sensei Anthony Bailey of Spirit Combat International and trained with him on and off for three to four years.

Tony is a 4th-dan instructor who is also an executive member of the Professional Bodyguards Association (UK) and a former BJJA Heavyweight champion. he has also been a driving force in the recent implementation of new licensing requirements for door supervisors and security staff and has taught control and restraint techniques to both the UK police and prison service. 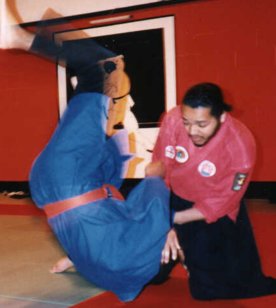 Tony has a strong tradition of Martial arts in his family. His father Maurice, was a Judo instructor of some renown and Tony and his brothers Scott and Jeremy all studied Judo from a very early age. Tony's younger brother Jeremy is also heavily involved in Ju-Jitsu and Kickboxing and holds 4 UK and European titles.

Knowledge and experience are obviously important, but Tony is also one of those rare individuals who is a born teacher. He never loses patience, even with some of his slower students (such as me!) and his practised eye quickly spots and gently corrects the many mistakes I made.

I have a particular interest in weapons, especially Katana (Samurai swords) and Sai, along with other classical Chinese and Japanese weapons such as Kama, Nunchaku and Tonfa. Each weapon requires a distinctly different discipline and approach and all demand a high level of coordination and precision. You also have to train regularly with your weapon(s) of choice to remain proficient and it is amazing how quickly your skills go rusty.