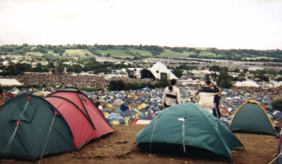 No-one in our group had been to one before and since the year 2000 marked the 30th anniversary of the biggest event of it's kind in the world, it had to be done. The opportunity to support worthwhile causes including Greenpeace, Oxfam and Water Aid was an additional bonus and so we fronted up the £90-per ticket cost and began to get packing.

Thursday afternoon we dutifully arrived at the 600+ acre site in West England (in the pouring rain) and proceeded to lug our gear onto the site. 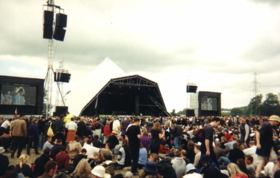 A break in the rain allowed us to pitch tents and stow our gear just before the heavens opened and in true Glastonbury tradition it began to rain heavily. Fortunately it didn't last and the last of the rain blew over within a few hours.

For me, Glastonbury was a mixed bag. I detested much of the dance music, which I felt had overshadowed the rest of the festival (Glastonbury is after all, an ARTS festival - it's not just about music) and for the first couple of days, found myself in a very uncomfortable environment.

It is very ironic that the vast majority of trouble onsite (certainly what we witnessed) seems to be mostly attributable to the one legal intoxicating drug available on site...alcohol!

Few things put people off such events more than aggressive abusive drunks crashing into people and tents at all hours of the day and night, as they stagger blindly from one place to another. 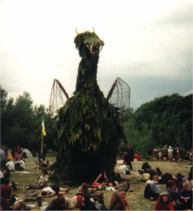 We enjoy a drink or two as much as the next man, but there's a BIG difference between tipsy and thuggish. Alcohol on its own can be bad enough, but when mixed with some drugs (such as ecstasy or amphetamines) can produce lethal results - and not just to those who take them...

Additionally, some of the facilities left a lot to be desired. Maps were provided and proved to be fairly useful, but by and large, much of the site was poorly sign-posted and some areas were badly lit. Toilet facilities are still rather primitive and there were no where near enough rubbish bins (those that were present were often overflowing and not emptied often enough, nor were there sufficient recycling facilities available - although volunteers did regularly patrol the complex in groups, collecting cans and giving out rubbish bags - great work guys!)

While the site DOES offer free secure lock-up facilities, theft and vandalism is prevalent in some places and better security is necessary to prevent the thousands of people who descend onto the site by climbing the fences or digging under them.

If everyone actually paid, the ticket prices could be lowered and more adequate facilities to cope with bigger crowds could be implemented (I understand that Glastonbury only has a license for 90,000 people, but well over 150,000 are thought to have visited). Fire regulations and safety measures didn't seem to be to prevalent and in many areas of the campsite, tents almost overlapped. 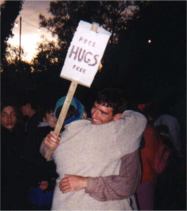 Fortunately, on Saturday morning, things improved greatly; The sun burst forth and within hours the boggy ground had dried and hardened and the good weather continued throughout the weekend.

The first act on stage for the day was Ladysmith Black Mambazo whose harmonies are legendary. Their act was superb as always - an extremely pleasant way to spend the morning.

We also spent the day at the Green-fields part of the festival, well away from the din of perpetual dance/rave music (which I personally believe to be heartless, soulless and mindless).

The Green-fields area had a completely different feeling. Craftsmen, artists, musicians and performers all demonstrating their particular talents and skills led to a carnival atmosphere here; where the latest ideas and innovations on green technology were demonstrated to the visiting public in a fun, hands-on way. 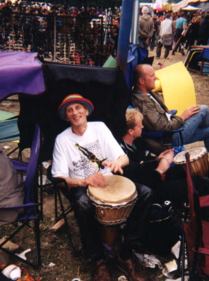 In one tent we visited, a band of Reggae musicians who had a 4-man bicycle connected to their amps and equipment. The policy was "you pedal, we play" - the crowd took turns pedalling on the cycle to generate the necessary electricity and as long as there was sufficient power, the band played on).

At another part of the site, visitors could enjoy a hot shower or log onto a small computer network to surf the web or check their e-mail. All power for the showers and network was provided by solar energy. There was a great variety of information of a diverse range of environmental issues, from petitions to advocate alternative energy sources, to information on organic produce and GM-alternatives. As one visitor was overheard to say (very succinctly):

"The resources of our world should belong to 6 billion heirs - not 60 billionaires..."

A vast array of stalls and stands offered something for everyone. In many of the stalls you could watch the craftsman at work, from carving beautiful sculptures in old tree trunks or driftwood, to tool makers creating basic agricultural tools from recycled metal for use in the many parts of the third world, where resources are scarce at present. 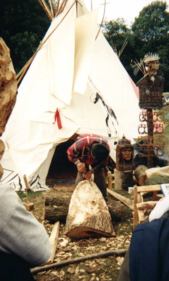 For those interested in gems and minerals, a number of stalls displayed wide varieties of polished stones and jewellery.

Others offered refreshments from a huge variety of different cultures in cool and quiet surroundings, affording us an ideal chance to take the weight off and relax. While all around us various entertainers amused the crowd with displays of juggling, twirling, acrobatics and fire-eating, musicians provided a range of musical interludes and poets offered recitals of their work.

Elsewhere artists drew, sculptured and sketched, while stilt-walkers and performers in a range of costume amused children and parents alike.

I sat in a small enclosure between a couple of stalls in the sun, listening to a wonderful band called PlantPot, who consisted of a Bassist, acoustic guitar, flute and bongo combination with occasional vocals. They would play a song or two, all the time experimenting with different sounds and accompaniments, grinning every time they found something new and interesting. Overall their music reminded me of a cross between Clannad and the Stone Roses. I even bought their album "Adventures" (although I must confess that I preferred the instrumental-only version of many of their tracks that they played on site, rather than some of the with-vocals tracks which were on the album). 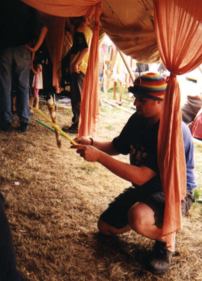 The Green-field area, also includes a "healing" field, where a wide range of alternative therapies (from Aromatherapy to Shiatsu massage) are offered. Many performed their services for nominal charges or for a small donation to a variety worthy-cause charities. Well worth a visit.

As the sun went down, we joined many others at the standing stones located on a nearby hill to enjoy the sunset and marvel at a fantastic fireworks display (as good as anything I have seen in the UK - almost as good as places such as Disneyworld). Although we didn't see it, apparently there is a ritual druidic drumming display every morning at dawn, to herald in the light of the new day.

By the end of the evening we were all very reluctant to return to the "dark" side of the festival, where we were camped (the difference in overall atmosphere of the two parts of the festival was very evident - more so after visiting the Green-fields). We really felt we had to be on our guard, the minute we arrived at the outskirts of the Pyramid stage and throughout the rest of the camp site.

The Green-fields part of the site represented (for me anyway) the true spirit of Glastonbury. Full of smiling happy people, enjoying the sun and music, or browsing through the stands and stalls, enjoying a meal, drink or a chat in an atmosphere that the festival organisers would have been proud of. In sharp contrast to the rest of the site, which, sadly, appears to have forced the Green-fields part of the festival well onto the sidelines. 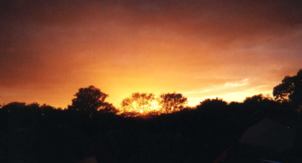 I would definitely be willing to attend another Glastonbury...but only if I could be based on or near the Green-fields, well away from the drunken-morons element. I think there needs to be more balance between the two aspects of the Glastonbury festival (TV coverage seemed to largely ignore the green-fields area by all accounts, in favour of the Pyramid stage) - Ideally perhaps the festival could be split over two successive weekends; One with an emphasis on dance music (That is what many people want after all) and the other with an emphasis on the arts part of the festival.

Rating this one was difficult so I have decided to give two ratings; one for the dance/rave side and the other for the Green-fields.

First - The Dance/Rave part of the festival (which mostly sucked) is hereby awarded two bandannas - and it was lucky to get that!

Secondly - The Greenfield part of the festival is hereby awarded 4 bandannas. Great time and highly recommended.

It was certainly an experience and overall I had a great time.