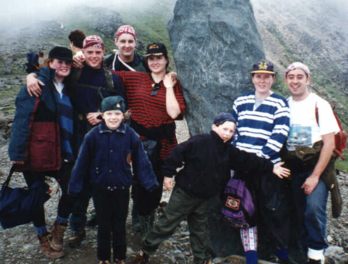 In 1996, Andy and Triona suggested the idea of taking a long weekend away to Snowdonia in Wales, to climb Mt. Snowdon and in July, together with Andy's niece Kerine and our young friend Ben, we headed off to Snowdon, in Andy's Range Rover.

With the exception of Andy, none of us had any previous experience of this sort of climbing at all and the idea of climbing a mountain had a real appeal. So, on a fine Friday morning in July, with a hearty breakfast inside us, we headed off to begin what was one of the best events we have ever done.

The plan was to simply follow the Pyg track to the summit, have lunch on the summit and then split into two groups; Su would take the kids back down on the train that runs up and down the mountain on an hourly basis, while the rest of us would walk around one side of the "horse-shoe", descending close to where we began. 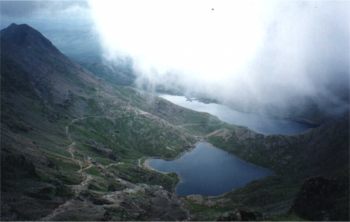 By early afternoon, we had huffed and puffed our way to the summit, enjoying the fantastic views and having a good laugh along the way. The feeling you get when you finally reach the summit and behold the view, is indescribable. I can certainly see why this is so appealing to so many people.

After a hot lunch at the cafe, Su took the kids down on the train as planned and we began our descent along the ridge of the horse-shoe. And that's where the fun began...

The weather is unpredictable at almost 3,500ft but held for us as we began our descent. However, we had left the summit a little later than planned and were now running behind schedule.

About ¾ hour later, we met a party of climbers coming the other way. We stopped to talk to them and found that they were a part of semi-experienced climbers who had apparently done this climb before. They were hurrying towards the summit, planning to catch the last train down for the day and informed us that the light would probably fade too quickly to allow us to follow the horse-shoe all the way. Instead, they suggested a "short-cut" that would take us back down to the Pyg track, where we could still walk out before dusk.

Heading down the crag.
Photo: D.Thomas

We decided to take their advice and cut down to the Pyg track. But before long, we found ourselves in trouble when we suddenly faced the prospect of having to descend down an almost vertical drop of almost 800 feet with no grips or suitable hand-holds! Whether through some mistake or mis-understanding that we will probably never know for sure, we quickly found ourselves in quite a dangerous situation...

Smoko was called and we discussed our options; We could go back up to the horse-shoe and either return to the summit or walk further, or we could continue our descent. Time and the light were fading fast. We unanimously agreed to push on and so after roping ourselves together we continued our descent towards the Pyg track. Andy led the way, hacking hand-holds along the edge of a crag with my sheath-knife and descending a few feet at a time, while the rest of us anchored him until his footing was secure. Then one by one we followed his lead.

The ground was wet and slippery, full of loose stone and shale. All that had to happen was for one person to panic and slip, and we would all be in trouble. Everybody was well aware of this without a word being spoken; talking and helping each other to keep our spirits up. Everyone kept calm and worked as a team and slowly but surely, we descended. 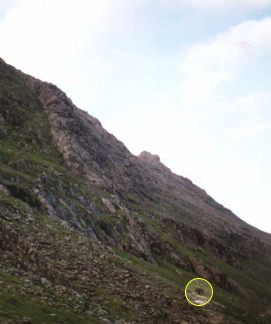 The crag we climbed down
to reach the Pyg track (aprox 900 ft).
Photo: P.McKenzie

Eventually the sheer drop gave way to a more and more gentle slope, until we finally touched down back on the Pyg track, shouting and cheering. What a rush! Never before, have I put my life so completely in the hands of another, or asked another to put their life in mine. It was a moment that forges lifelong friendships and it was our baptism in fire. For the Bandanna club, Snowdon was our Genesis.

The previous picture gives an idea of how steep the drop was, but not how high ... until you realise that the tiny figures in the bottom right-hand corner (in yellow circle) are...well...us. It still amazes me when I look back on it, even now.

By dusk we had reached the gates of the national park and we arrived back at our digs just after dark. A hot shower and meal has never felt so good and after quite a few beers, exhaustion finally overcame us and we went our separate ways, staggering off to our individual digs.

It was a unique experience which gave us all valuable insights and as a result, our friendship and respect for each other has grown immensely. It is said that a man can be measured by the quality of his friends. If that's true, then I'm a very lucky bloke indeed.

PS: We never did find the blokes who pointed us down the crag (and believe me - we LOOKED!)