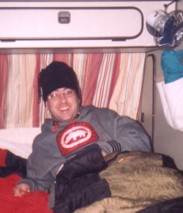 In October 2002, Andy, Tosh and I packed our climbing gear and supplies into Andy's new Bandanna-mobile and headed Northwest, across the Severn Bridge and into the Forest of Dean in south Wales for our annual lads weekend away.

A couple of hours later, as darkness fell we parked the van and over a hot coffee, watched the sunset and the moon rise over the ruins of Tintern Abbey and the river Wye.

About an hour later, we arrived on the edge of the Forest of Dean. It had started to rain and was getting a bit on the late side, so we found a handy campsite and parked the 'Joker' up for the evening.

A quick bite to eat and an evening spent drinking good whiskey, swapping jokes and playing the guitar, all helped to ward off a VERY cold pre-winter Wales evening. We finally crashed out in the wee small hours, after the gas (and the whiskey) started to run a little low. 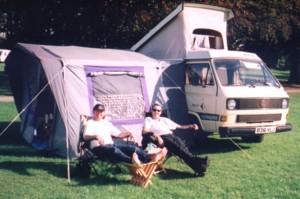 Chillin' by the 'Joker'
Photo: A.Patterson

The following morning we awoke to find that the rain had passed and had been replaced by a heavy frost. But the skies were a deep and bright shade of blue as can only be found in Wales after the rains and which held the promise of a bright and sunny day.

A couple of cups of hot coffee and a few bacon sandwiches later, and it was time to square our kit away and head over to the Symonds Yat campsite. The campsite was pretty well equipped; good facilities for tents, caravans etc, reasonably priced and with some spectacular views and easy access to some of the more interesting hiking trails.

By 10:30am, we had setup the awning, squared away most of our gear and were enjoying the warmth of the morning. As the morning turned into the afternoon, a light breeze arose, which we thought would be great to fly Andy's 3 metre para-kite.

Unfortunately, it didn't last very long and after a few abortive attempts to get airborne, we decided to give it up for the day and instead headed off into the Wye valley for an afternoon's hiking. 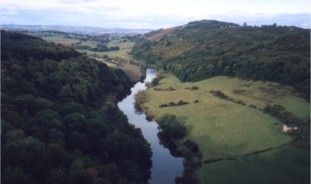 The rambling paths and trails are well maintained and pretty well signposted in most places (though there are a couple of dodgy spots where trail markers had vanished) and the hike down was very enjoyable.

There are a number of excellent lookout spots at various stages down to the valley floor and the edge of the river Wye, where you can find commanding views of the entire valley and even watch peregrine falcons ride the air currents, swoop and dive.

The Forest of Dean is of course home to a wide variety of wildlife, including a large number of different birds, deer, badgers, otters and adders.

We arrived on the valley floor just in time to pop into one of the local pubs for a pint. We had missed lunch but fortunately, one of the local tea rooms took pity on us and managed to rustle up three excellent steak sandwiches. 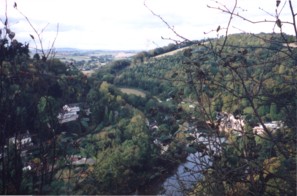 A river runs through it
Photo: P.McKenzie

We sat by the rivers' edge and watched the ferryman (one of the local publicans) periodically cross the river and carry people back and forth. Finally we too crossed the river and started heading back up the valley as darkness fell.

The moon rose almost on cue and we walked up the valley in it's silvery light, pausing on the footbridge at the head of the river to share a smoke and watch the fast running waters of the Wye below us, before heading onwards and upwards. Just after 9:00pm we arrived back at the 'Joker' and after a hot feed of Chilli washed down with a few more beers we settled back, played a few songs and dozed off as the night wore on.

Next morning was time to head back. We packed up and headed out just before lunch, stopping at one of the hotels we had passed on our hike the previous day, for a mixed grill of Kangaroo and Crocodile steaks before hitting the road again and heading south.

All in all - an excellent weekend break. Friendly locals, great food, some terrific hiking and a lot of laughs.

What more could you want?